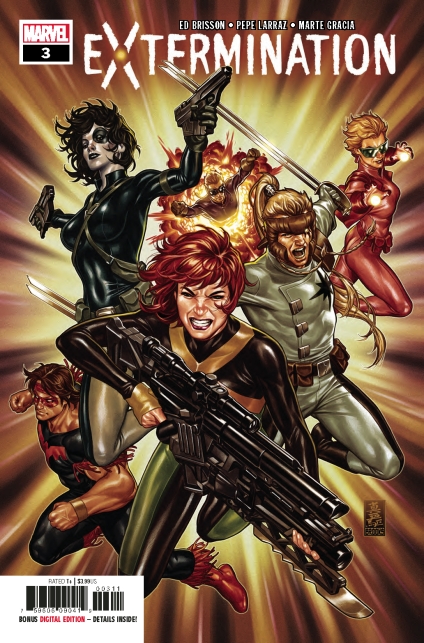 The Story So Far:

Ahab has returned!  He’s come from the future to kill the time-displaced original X-Men.  A younger version of Cable appears to have other ideas.  He has also time-jumped to the present and killed his older self and appears to be snapping up the young X-Men, starting with Iceman and Angel.  He’s also abducted Mimic.  No one is sure why these two time travelers have appeared.

The remaining young X-Men; Scott, Hank, and Jean, have been split up and are being guarded by various groups of elder X-Men.  Scott is with Jean Grey at Searebro, Young Jean took off with X-Force on the offensive, and Young Hank is at the Xavier Institute.  Ahab attacks the Institute, and mysteriously, instantly, turns Old Man Logan into one of his Hounds.

The action picks up right where last issue left off, with Logan standing over a cowering Young Beast, who is saved by Beast…let’s just call him Henry.  Frankly, I hope this story really does solve the young, displaced X-Men situation.  It’s just confusing to have multiple versions of the original five X-Men hanging around.  Well.  Except Cyclops.  Anyway, Henry fights Old Man Logan to protect Young Beast, while Ahab does his villain thing and explains that the two French mutant children the X-Men saved back in issue #1 were actually planted by Ahab, and their powers allow Ahab to implant psychic “bombs” in people’s minds.  These bombs are info dumps of several years’ worth of torture.  Rather than the old fashioned way of actually performing the torture over years to create a Hound, Ahab can now simply activate a sleeper Hound whenever he pleases, which is exactly what he did to Logan, and which is exactly what he does to Nightcrawler, who is at Searebro with Young Scott and his other protectors, and Shatterstar, who is with X-Force on an X-Wing looking for Young Cable.

Kurt “bamfs” Scott out into the deep sea, and Shatterstar attacks young Jean.  Old Jean saves Scott, telekinetically bringing him back to Searebro.  Cannonball grabs Shatterstar and gets him as far from Young Jean as he can.

Meanwhile, Young Cable shows up at the Institute and abducts Young Hank, while Henry appears to succumb to injuries sustained in the fight with Ahab and his Hounds, who teleport back to Ahab’s appropriately-named flying base, the Pequod, where Ahab is informed that Cable is also abducting young X-Men.  Ahab orders his crew to head for Searebro.

Domino lectures Jean that X-Force does things a little more bloody than the rest of the X-Men are used to, but it appears that Young Jean has a dark side, because she just doesn’t care, and instead leads X-Force to Young Cable’s base of operations, where the issue ends with X-Force and Young Jean confronting Young Cable.

Again, the story is stellar.  It’s moving along at a breakneck clip.  Though I dislike the move towards a more cinematic scope that Marvel has seemingly taken since the early 2000’s, I can say this:  it works here.  This is how an event comic should feel.  This should be epic, and fast and explosive.  And it is.  Brisson’s take on Ahab is spot-on.  And though I’ve never liked him as a villain before, he certainly feels formidable here.

The Art:  Larraz continues to impress.  Ahab is suitably creepy, and the action flows very well.  He’s got a great handle on visual storytelling, which seems evasive to many artists these days. (I’m looking at you, Daniel Acuna).

Ugh.  Ok, so I’m hard pressed to find much to complain about with the actual story or art, which is nice. This has been one consistently consistent mini-series.  So I’m going to talk about something here that neither Brisson nor Larraz really has much to do with:  the time displaced original X-Men.  Ok, it was quirky for Bendis to bring them to the present during his run, and I appreciate that he didn’t just put the genie back in the bottle when he wrapped his run on the X-Titles, since that trope is pretty played out, but I think in this case I wish he HAD done just that.  It’s not so much that it’s confusing (unless you’re writing about them, see above), it’s that…well, I’m just done with it.  Either kill off the older versions, or send the kids back to their time.  One set of Original X-Men for me, please.  I’m hoping, like I said earlier, that Brisson cleans this timeline mess up once and for all.